skip to main | skip to sidebar

Tanks and Poles and Signs

We went to the block today, and first thing we noticed is we have a sign! :) :) I took a pic of Tim pointing at it, cause he was amazed that they printed it up specially for us, with our lot number on it .. hahaha
We also finally managed to get a pic of our water tank.. :) We were wishing we had a shed or other roof hooked up to it, so it would be over flowing now.. ahh well.. its still 3/4 full , as we had a truck bring a load of water in..
We also have a power pole! yayy.. our electrician (B.I.L.) wasnt sure if it would have been installed as we had more rain, and may have been too boggy.. but we do. and it looks fantastic..
I know only 'Homeone' guys will understand my excitement at having a powerpole.. lol
I hope you enjoy the pics.. Oh and I will add a couple of pics of the kids, playing in the dirt of our attempted site scrape... Tim had to get his hand in too! ( biggest kid of all lol)
-Sha 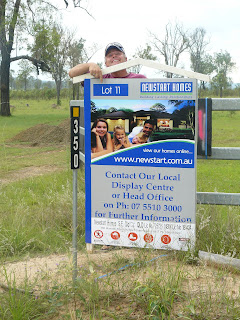 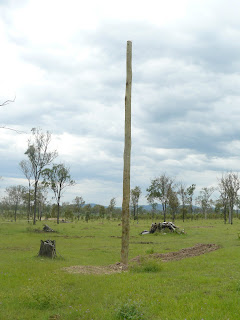 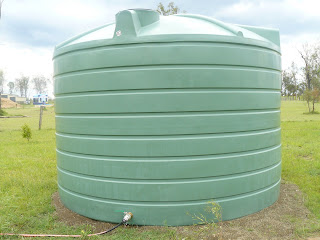 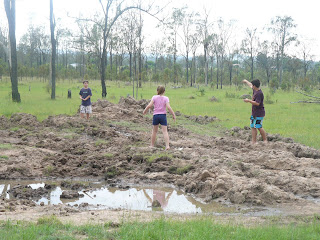 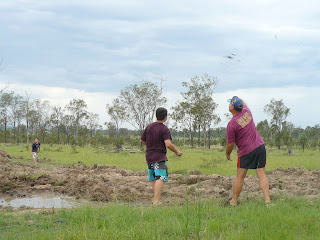 "M" called today to say the excavator guy had been back to our block, hoping to cut it again.. nope! still too wet. (not surprisingly)..
He advised us that we need to cut out the driveway and put some shale or roadbase down .. yes on all 85 metres of it!! First thought.. this is gonna cost some big $$$..
We got some quotes from a few businesses (not too bad priced, but they didnt seem confident with what had to be done), so we then called a 'local lad'. He knows our soil type, and says that it will not work by doing what the builder has suggested, as the water will simply push its way through, and we will make a huge mess, once we start cutting. Instead, he said we should not cut it, but just put some crushed sandstone down, mixed with cement powder over the top of the exsiting grass/mud. He seems to know what he is talking about, and we will be going with this method, even though its the most expensive. If the weather stays fine, then he will be on site on Saturday to get that done.. and fingers x'd, we will be able to have the site cut next week!
Also..
We had our water tank delivered yesterday. It holds 5000 gallons (22700 litres). So that combined with the one we are having underground off the house (another 32500 litres) should be heaps of water.
DH forgot the camera yesterday, and it was too dark once I got there, so I will get pics on the weekend :)
-Sha
Posted by -Sha at 10:25 PM 1 comment:

Well.. we tried to get the trench dug and the gravel down on the driveway... but with so much rain around, it was not to be.... The builder is very keen to start, but he is going to have to postpone for a few days atleast until it dries out... Pictures speak for themselves..... 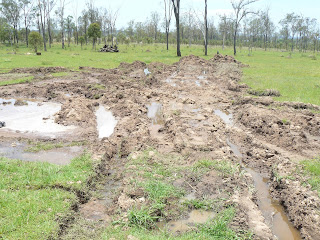 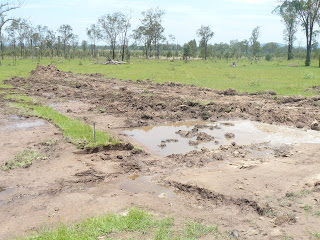 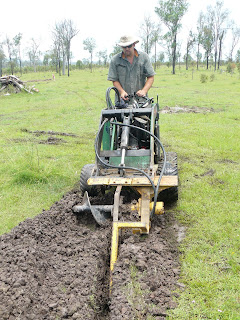 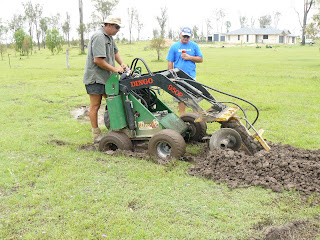 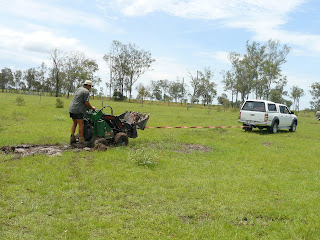 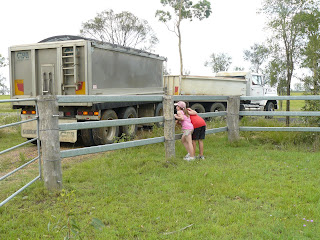 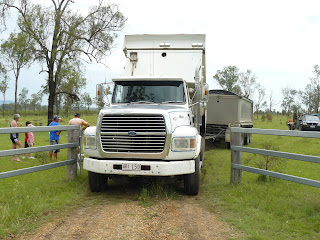 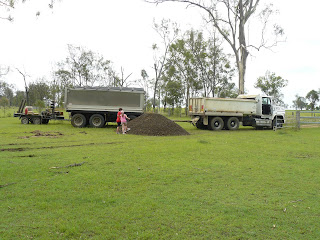 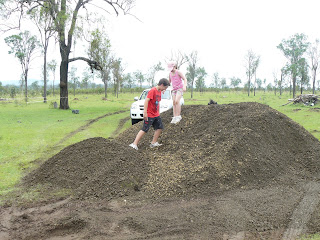 We only managed to get a few metres of the trench done, and the gravel is still in a pile where it was dumped.. With so much mud, the gravel will just sink into it. When it dries up a bit, the builder is happy to spread it out for us...
We think a few more truck loads will need to be ordered.
The kids wasted no time jumping all over it!!
-Sha
Posted by -Sha at 1:56 PM No comments:

They attempted site scrape today, but it was sooooo boggy that it looks like the excavator must of bellied out in the mud.. He had to give up.. :( and... we have had more rain tonight.. *bugger!*
Tomorrow we have a friend and his trench digger coming to dig our trench for the electrical cables, and hopefully the local quarry is turning up with some gravel rocks for our driveway (we need to supply all weather access). Hope it dries out a lot over night! but we arent very optimistic..
Does this mean that today is still officially our first day of construction??
Here is a pic of our 'attempted' site scrape.. DH standing in the mud...
(Please excuse quality of pic, as it was taken with phone camera, and it was getting dark) 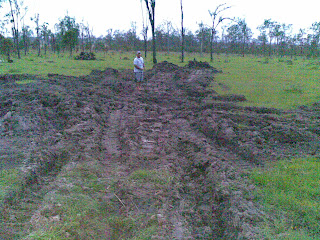 We have our rain tank turning up on Tuesday, and our electrician is coming out next week to install the power pole on our property, bring the cables in to the house and install our meter box near where the house is going.

Full steam ahead, if only the rain would stay away!

YAY!! We are starting today!!

We had a call from our 'original' SS "M" this morning , asking us where our block is! lol as the excavator man couldnt locate it...(It is a little bit hard to define, especially since all this rain, the grass has grown quite a bit - We must get out there and mow!) So.. it looks like we are getting scraped today... wooohooo!! Now the fun begins :)
(Guess they just got the SS's name wrong, and "M" will be our SS for the duration.. hopefully :))
-Sha
Posted by -Sha at 8:34 AM No comments:

We were advised by our SS - "M" that our site scrape was booked in for today - 04/12/08.
Tim and I both had to work late, so it was a mad dash up there in the dark tonight. We were expecting to see lots of mud (we had storms this afternoon), and when we got there we did see lots and lots of mud.. and soggy grass... but none that had been turned over with an excavator :(
In the mail today was a letter from our builder, congratulating us on beginning our construction, and an invoice for the base payment! Since we havent even had site scrape yet, we think this is a bit premature!!
It also mentioned that our Site Manager "B" will be in touch with us prior to excavations.. What the.. or rather Who the..??
So we have no idea now when we will start or who will be running the show..
Lots of rain is expected for Friday through to Monday, so we dont think we will get anything done now until late next week.
That hasn't stopped us crossing 'everything' in the hope that we have a slab for Christmas :)
-Sha
Posted by -Sha at 11:34 PM No comments:

Disclaimer - This blog is our way of sharing our story. It is intended for our family and friends and any others whom may be interested in reading.Company names are mentioned with the intent to tell our experiences. If you believe that any statements made are in any way defamatory slanderous, hateful, obscene, or vulgar, please contact us to allow the item in question to be edited or removed from this blog.